Getting back in the Game: ACL Sprains, Tears & Reconstruction 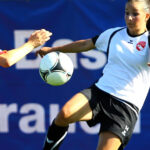 An anterior cruciate ligament (ACL) sprain or tear is one of the most common knee injuries. About 50 percent of all injuries to the ACL happen with damage to other knee structures: articular cartilage, meniscus or other knee ligaments. ACL injuries are estimated at about 200,000 annually, with 100,000 ACL reconstructions performed each year. Athletes who participate in high-risk sports like soccer, football, basketball and skiing are more likely to have ACL injuries.

The ACL can be injured in several ways:

The knee is the largest joint in our body. The knee flexes and extends our leg where the femur (thighbone) attaches to the tibia (shinbone), allowing us to walk, run, climb and squat. Protecting the knee joint from injury and allowing it to move are several surrounding structures. The quadriceps and hamstring muscles move the knee joint. When the quadriceps muscles (found on the front your thigh) contract, the knee extends. The hamstring muscles, located on the back of your thigh, make your knee bend. These muscles are also protect your knee from being injured by stabilizing and preventing it from being pushed in unusual directions.

The knee joint is stabilized during rest and movement by four ligaments: the medical and lateral collateral ligaments (MCL, LCL) and the anterior and posterior cruciate ligaments (ACL, PCL). Also cartilage, medial and lateral meniscus (the two thicker wedge-shaped pads of cartilage attached to top of the tibia or shin bone) found in the knee cushions and protects the bones from everyday stresses such as walking, running and climbing. There is also articular cartilage that lines the joint surfaces of the bones within the knee, including the tibia, femur, and knee cap (patella).

Right after ACL injury, patients typically experience pain and swelling and the feeling that the knee is unsteady. Within a few hours after the injury, patients usually have knee swelling, loss of full range of motion, pain or tenderness along the joint line and discomfort while walking.

Injured ligaments are considered “sprains” and are rated on a severity scale:

When a patient with an ACL injury is seen, the orthopedic surgeon will review the patient’s symptoms and medical history. A few tests may be ordered such as: X-rays to look for any possible fractures, or a magnetic resonance imaging (MRI) scan to evaluate the ACL and to check for evidence of injury to other knee ligaments, meniscus cartilage or articular cartilage.

In addition to performing special tests for identifying meniscus tears and injury to other ligaments of the knee, the Lachman’s test is often performed to see if the ACL is intact. If the ACL is torn, your physician will feel increased forward (upward or anterior) movement of the tibia in relation to the femur and a soft, mushy endpoint (because the ACL is torn) when this movement stops.

If you have injured your anterior cruciate ligament, you may need surgery (ACL reconstruction) to gain full knee function again. Several factors depend on your treatment plan, such as the severity of your injury and your activity level. More sedentary people who do not participate in sports that involve a lot of quick stops and changes in direction, usually recover well with conservative treatments and physical therapy. A torn ACL will not heal without surgery.

With nonsurgical conservative treatment, physical therapy and rehabilitation using specific exercises will restore the function to your knee and strengthen your leg muscles that support the knee. Also your physician may suggest a knee brace to protect against instability. However, many people who choose not to have surgery may experience a secondary knee injury from repetitive instability episodes.

Nonsurgical management of isolated ACL tears can be successful for patients:

Your orthopedic surgeon may recommend ACL reconstruction if:

Reconstruction of the ligament is required as most ACL tears cannot be stitched back together. Your orthopedic surgeon will replace your torn ligament with a tissue graft. This graft acts as a framework for a new ligament to grow on.

Grafts can come from several sources, and your physician and you can discuss and decide the best option for your injury. Often they are taken from the patellar tendon, found between the kneecap and the shinbone. Hamstring tendons at the back of the thigh are a common source of grafts. Sometimes a quadriceps tendon, which runs from the kneecap into the thigh, is used. Also a cadaver graft (called an allograft) can be used.

Grafts commonly used to replace the ACL include:

ACL surgery is completed by using an arthroscope which makes small incisions. Arthroscopic surgery is less invasive and benefits include less pain, reduced time spent in the hospital, and quicker recovery times.

Patients who have ACL surgical reconstruction have long-term success rates up to 95 percent. Recurrent instability and graft failure are seen in approximately eight percent of patients. Regrowth takes time, therefore after surgery it may be six months or more before an athlete can return to sports.